Revenues for the company rose from $15.39 million in 2018 to $311.3 million in 2019, with the vast majority of it coming from sales of the CBD-based drug Epidiolex/Epidyolex. The first-ever (and at present, only) CBD-derived drug approved by the FDA is used to treat juvenile epilepsy, specifically intractable seizures caused by Dravet syndrome and Lennox-Gastaut syndrome (LGS). 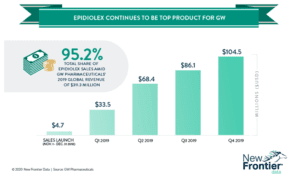 So far, sales of the drug have been an unmitigated success in the United States, with more than 15,000 patients receiving prescriptions for the drug by early November 2019. For context, approximately 20,840 Americans suffer from Dravet syndrome (about 1 in 15,700) with slightly more than 200 afflicted with LGS (approximately 1 per 1.5 million).

Late last year, GW Pharmaceuticals received approval in the European Union to sell Epidyolex, its European product. Though the drug was only available in Germany and the United Kingdom, they were enough to register sales of about $104.5 million in the fourth quarter. While it remains to be seen how Brexit will affect future sales of Epidyolex, any negative effect may be offset as the company prepares to go to market in Spain, Italy, and France.

Capturing approximately 87% of potential patients, U.S. sales of Epidiolex are expected to grow, if at a slower capture rate. The Hemp Business Journal projects 2020 U.S. sales of Epidiolex to grow around 77.8%, and to reach a high around $520 million. Due to the immature nature of the European market, demographic expectations are yet to be solidly modelled for reliable estimates regarding the EU.

In addition to treating Dravet syndrome and LGS, GW Pharmaceuticals has filed a new drug application with the Food and Drug Administration to extend the use of Epidiolex to the treatment of Rett syndrome and Tuberous Sclerosis Complex (TSC).

Rett syndrome is a rare genetic neurological disorder almost exclusively affecting women at the approximate rate of 1 per 10,000. Characterized by symptoms including loss of speech and muscle tone, and a slowed rate of growth for the head, feet, and hands, the condition afflicts more than 11,000 women in the United States.

TSC is a rare, multisystem genetic disease that causes tumour growth in the brain and on other vital organs such as the kidneys, heart, eyes, lungs, and skin. Approximately 1 in 6,000 children are born with it, totalling an estimated 50,000 patients in the United States.

According to GW Pharmaceuticals’ 10-K Filing, clinical trials measuring the efficacy of Epidiolex in the treatment of TSC have thus far been positive, and trials measuring the drug’s effectiveness against Rett syndrome are ongoing.  Assuming that the application is approved by the FDA, U.S. sales of Epidiolex may reach upwards of $1.5 billion over the next five years.

This Featured Article has been produced by New Frontier Data®. Rize ETF Ltd make no representations or warranties of any kind, express or implied, about the completeness, accuracy, reliability or suitability of the information contained in this article.

New Frontier Data’s Analysts Offer Predictions for the Year Ahead