In 2018 medical cannabis products were legalised for the first time in the United Kingdom. Subsequent to this legalisation, the country’s medical cannabis market is forecasted to increase in size massively. In 2019, the revenue of the medicinal cannabis market in the UK was less than 200 thousand U.S. dollars, by 2024 this revenue is expected to be approximately 1.3 billion U.S dollars. 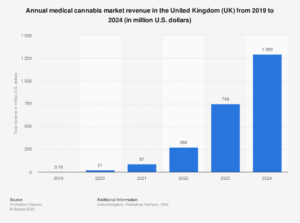 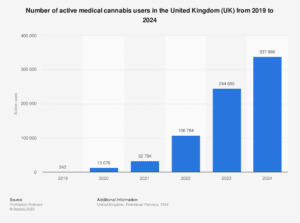 Across all age groups in Great Britain the majority of respondents to a survey would consider to some extent using cannabis-based medical products if there was strong evidence it would be an effective treatment for their health condition. Although, it is the older age groups who would be slightly more open to using medical cannabis for their health conditions, with 48 percent of those aged over 65 years saying they would definitely consider using these products and 30 percent saying they would probably consider it.

In 2019, 45 percent of British adults said they strongly supported the legalisation of some cannabis-based medicines by the British government which allows specialist medical practitioners to prescribe these medicines to patients, while a further 32 percent support this to an extent. There is very little opposition to the legalisation of medical cannabis among the British population with only four percent of respondents opposing to any extent. 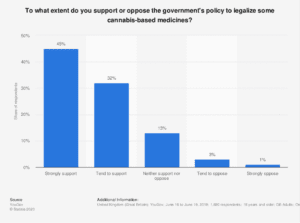