Domestic Disruptions in US Elections Provide Optimism for Cannabis Industry 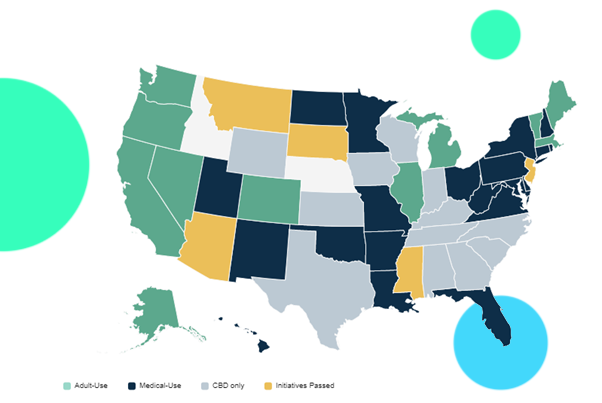 Amid the disruptions of the COVID-19 pandemic and a presidential campaign more contentious than any in modern American history, the 2020 United States elections yielded some historic milestones for the legal cannabis industry.

Even as the Electoral College has been sharply cleaved between blue states and red, and divisive factions in the culture wars splintered into any number of social-media echo chambers, the broad popularity of cannabis legalisation and policy reform has been well established.

As documented for more than a decade by each Gallup and the Pew Research Center, nearly two-thirds (66%) among US adults not only support legalisation, but Pew found that an overwhelming percentage (91%) among them feels that cannabis should be legal either for both medical and recreational use (59%), or at least legalised for medical use alone (32%).

What last week confirmed – through ballot referendums in five politically disparate and regionally removed states (Arizona, Mississippi, Montana, New Jersey, and South Dakota) – is that even in a polarised cultural climate, cannabis reform has established itself as an issue of common cause.

In each Arizona, Montana, New Jersey, and South Dakota, residents last week voted to adopt adult-use cannabis. In 2016, Arizona had narrowly failed to pass a similar measure, which raised questions about levels of commitment to the issue among traditionally conservative states. The question seems settled for now, given the support confirmed in Arizona (60%), Montana (58%), and South Dakota (53%), respectively.

South Dakota proved itself a unique case, as the Mount Rushmore State in one swoop legalised both recreational and medical cannabis. To date, every state having passed an adult-use measure had previously established an operating medical market. As the first to pass both programs in the same election cycle, South Dakota’s direct adoption shows that a staged approach is no longer a prerequisite for full legalisation, though its medical initiative passed more comfortably (69%) than did the adult-use measure (53%).

Mississippi marked its own unique path in adopting medical cannabis. There, where two competing bills for legalisation were presented, voters overwhelmingly preferred a citizen-backed proposal (Initiative 65) versus a more restrictive, government-designed measure (Initiative 65A). In so doing, the Magnolia State joined Florida as the second among the Deep South to legalise cannabis.

The initial upshot for the US legal market overall is that while the industry this year is expected by New Frontier Data to surpass $19.1 billion in sales, the future market will enjoy a boost: Revised projections for what had been $35.1 billion in five years are now increased by $3.2 billion (more than 9%), from $35.1 billion to $38.3 billion by 2025.

Perhaps most notably among the five new state markets, New Jersey’s pending rollout of an adult-use market will likely prove catalytic to legalisation throughout the Northeast. It all but guarantees that its tri-state neighbours New York and Pennsylvania (with the nation’s first- and sixth-largest cities by population) will adopt recreational markets in the next 12-18 months (as their respective governors have already telegraphed), and normalise their presence and socioeconomic benefits throughout other mid-Atlantic states (e.g., Delaware, Maryland, and Virginia) along the East Coast before the next presidential election.

The effects will also be interwoven to the framework of political representation. Most Americans – some 234 million people – will now live in either a legalised medical or adult-use market. Accordingly, fully 72% of the members of Congress, will represent constituents living amid legal markets. 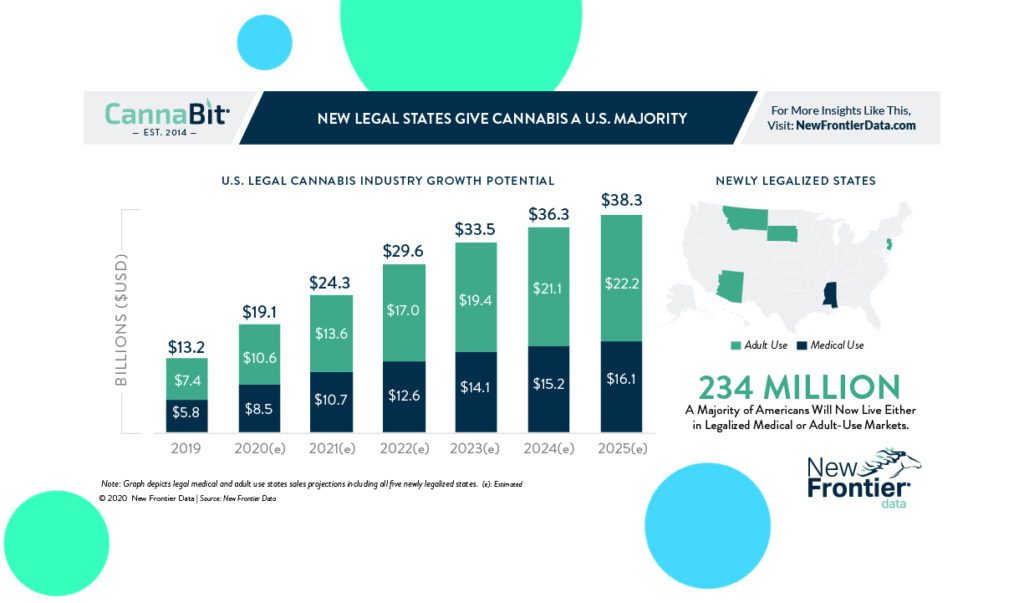 The new terms for the president, Senate, and House will see them considering the particulars for federal reform and its direction going forward. Meantime, while much remains uncertain and to be determined about the pandemic, national economy, and the new normal nationwide, the status quo today portends rich opportunities for investment and growth within state markets.

All the while, New Frontier Data will continue to monitor the market, gather new and ever more comprehensive data, and increasingly refine new analysis and market outlooks to better inform respective stakeholders’ business and policy strategies going forward.