European-based good agricultural and collection practices (GACP) provide a baseline for industry standards which agricultural producers must meet when cultivating plants used as medicine. Similarly, good manufacturing practices (GMP) serve to govern the European market. Accordingly, the standards have cooperatively raised the proverbial bar for cannabis production globally as growers and manufacturers seek entry into Europe’s fast-growing and lucrative markets. As countries beyond the EU begin importing medical cannabis, most are expected to adopt similar standards for the products that they import. Consequently, companies seeking to participate in the global market should expect stricter product standards as markets expand.

Europe is poised in the near term to become the largest global import market, as the region’s regulatory structure makes it well suited for cannabis trade within member states, and among cannabis-producing nations globally. Currently, however, cannabis struggles to a sure foothold due to the slow progress toward robust medical programs in key markets, including those of the U.K., Italy, Spain, Portugal, and France.

Germany’s market (the largest in Europe) has grown dramatically over the past two years, and until mid-2020, Germany was the world’s largest importer of medical cannabis. Yet, it remains small relative to the volume of production being activated worldwide. Until more destination markets are activated, significant market imbalances will likely remain between the fastest-rising volumes of production globally, and the slower-to-follow legal markets becoming available to absorb those products.

To sell or import medicinal products and active pharmaceutical ingredients (APIs) in Europe, producers must comply both with the EU’s GMP standards required for medicinal products, and certain quality risk-management practices. Facilities are inspected regularly to ensure that they continue to comply with GMP standards.

Location of a production facility is especially significant, as only a governmental authority may perform a GMP inspection, and each EU member state has its own inspectorates. For sites located outside the EU, the first member country into which the product arrives serves as the relevant authority.

Thus, each EU nation importing or considering the importation of medical cannabis must either conform to the importer’s adherence to GMP standards, or acquire their product from a GMP-compliant facility already in Europe. 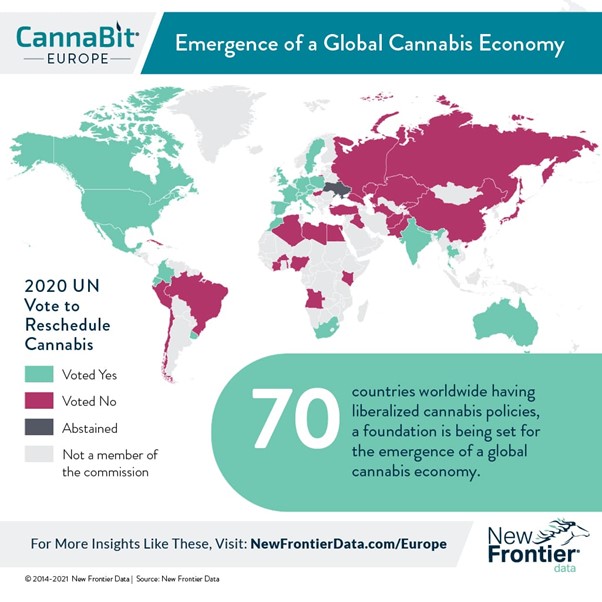 When considering Europe as a whole, inconsistent regulations have important implications even for low-THC products. Many European nations have allowed consumers to purchase products containing CBD, a non-psychoactive cannabinoid. In December 2020, the European Monitoring Centre for Drugs and Drug Addiction (EMCDDA) released a report on low-THC products in Europe.

Despite the apparent ubiquity of those products in the continent, variability in the amount of THC allowed in low-THC products presents challenges for those planning on importing CBD products to Europe.

Navigating the low-THC market is compounded by the EU’s Novel Food Regulation, which currently prohibits CBD-infused foods from being sold without first demonstrating that they are safe for human consumption. The standard increases costs and operational timelines for producers, who subsequently must fund clinical research about their products’ safety profiles before they can bring them to market. Yet even those rules are not uniformly applied: In Italy, CBD products derived from hemp and not exceeding 0.6% THC are considered eligible as food supplements. Such inconsistencies will likely continue to vex suppliers of CBD products for years to come.

While Tilray has begun exporting medical cannabis products to Ireland, Croatia, and many other European nations, Canopy Growth Corp. has established subsidiaries in the U.K., Spain, and Denmark, respectively. In fact, medical exports from Canada to Europe tripled between 2017 and 2018. Similarly, Aurora began construction on two large cultivation facilities (Aurora Sky and Sun) to produce 100,000 kilograms of cannabis annually, demonstrating the company’s strategy to capitalize on the substantial export capacity.

In May, Germany’s Iuvo Therapeutics Ltd. announced its successful importation of 20,000 units of full-spectrum extracts from Cann Group Limited in Australia. Believed to represent the single-largest shipment of full-spectrum extract ever from Australia, the transaction is indicative of another large player claiming a stake in an already crowded market.

In June, Flora Growth announced making a 2-million-euro ($2.4 million USD) strategic investment to become a preferred supplier to Hoshicap Portugal — a subsidy of Toronto-based Hoshi International. The move will reportedly solidify Flora’s position in supplying Hoshi’s EU processing facilities in Malta and Portugal, including a port to provide compliant, high-quality Colombian outdoor cannabis flower and derivatives to EU members and other global partners.

Suffice it to say that the European cannabis industry is reaching an inflection point. In order to succeed, stakeholders will need to balance regulatory challenges and continued regional market inconsistencies against emerging and growing opportunities both regionally and internationally. In the short term, jostling for competitive position will determine the outlooks for those seeking permanence in a highly dynamic arena.