A record half year in EdTech funding with 568 rounds raising $10B of investment as, ready or not, the world turns to technology to support learning and education delivery.

In the decade starting 2010, EdTech Venture Capital investments were at $500m and finished 14x higher at $7B in 2019. At this time we conservatively projected that $87B would be invested over the next 10 years between 2020-2029, almost tripling the prior decade. However, 18 months into this decade, we have already seen $26B of VC deployed into education technology. Our momentum funding scenario suggests we may reach that $87B mark with several years spare and could see up to $150B of VC deployed this decade, with the assumption that the ‘COVID-fuelled’ investment surge moderates and the underlying momentum continues at sustainable investment rates. With 27 EdTech Unicorns at the end of 1H 2021, 53 Mega Rounds ($100M+) in the last 18 months and now more than 3,000 funding rounds over $5M in EdTech’s history, our underlying momentum assumptions see EdTech integrating further and further into learning delivery and learning processes.

We’re excited to share a high-level early release of global EdTech funding for the first half of 2021. Customers can explore saved charts and dig deeper into the underlying transactions and funding trends. The platform is now tracking 1.5-2.0x more deals in education than any of the financial data platforms and allows for granular segmentation into four sectors, ten sub-sectors and fifty clusters. Customers can also now register with your account manager for the Q2 Executive Briefing, which will break down all the action and uncover the emerging trends from the first half of 2021. 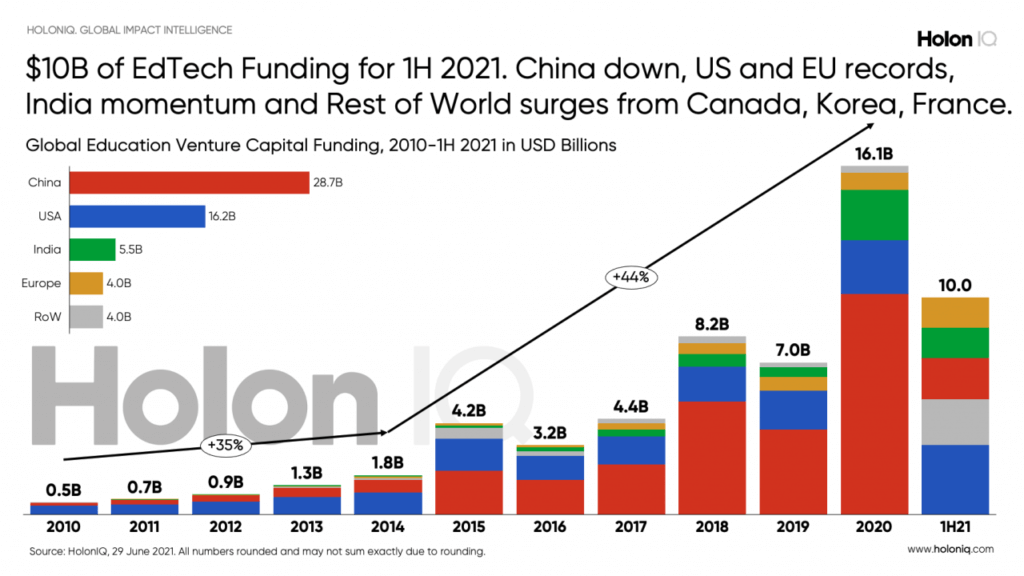 EdTech funding in the first half of 2021 was incredibly significant for so many reasons. We saw the strongest half-year of EdTech funding ever, with a massive change in regional mix – China down given regulatory uncertainty, the US and Europe outperforming their respective 2020 investment levels in just the first half of 2021, India demonstrating strong momentum and key markets such as Canada, Korea, France, Australia and others setting new records domestically.

COVID-19 accelerated Education Technology with both public and private leaders acknowledging we’ve seen at least 3-5 years of normal technology adoption in just over 12 months with the disruption driving the sector to think completely differently about the way the world learns. From Early Childhood to K12 and Vocational to Higher Education, new models and technology from startups to global giants are growing rapidly to support learners, parents, teachers and administrators looking to lower the cost and price of education, spend more time learning and teaching and accelerate outcomes in the learning to work and up-skilling journey. 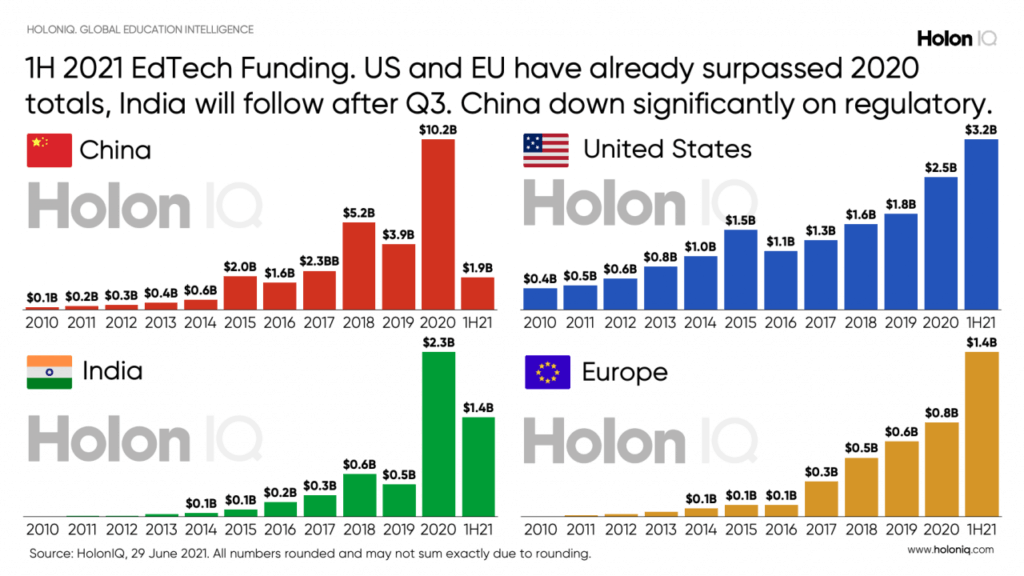 Deal Value totals are often skewed by Mega Round outliers and Deal Volume stats expand and contract with early-stage startups raising Seed and Series A’s to experiment in new spaces with new models or become new entrants. To look through both of these forces, below on the HolonIQ Intelligence Platform, we focus on funding rounds greater than US$5M and for all clusters of our open-source taxonomy. This extends from early childhood through to workforce including UpSkilling, Capability Development, Workforce Planning and more broadly the converging spaces focused on the future of education and work. 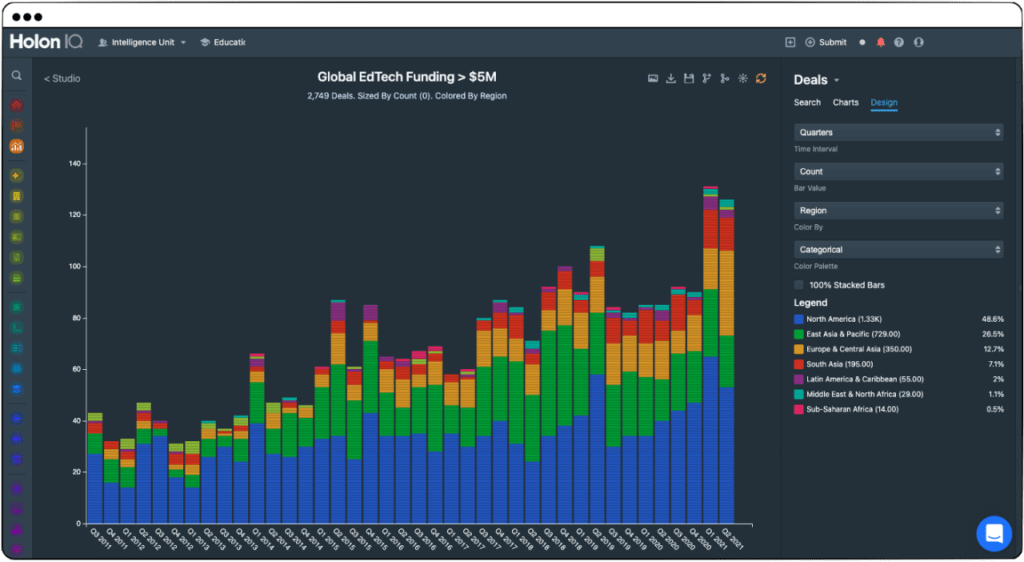 When we look back 10 years by quarter, we see North America attract nearly half of all venture capital investments. East Asia, not far behind on total dollars, has traditionally had fewer but much larger investment rounds, until recently. Europe has seen strong and steady growth with 2021 a stand out year so far. South Asia has also grown steadily but, like China, has had a steady flow of mega rounds in a small number of companies which skew the perspective when looking a deal value. Latin America is growing and set to expand through the decade alongside MENA and Africa. 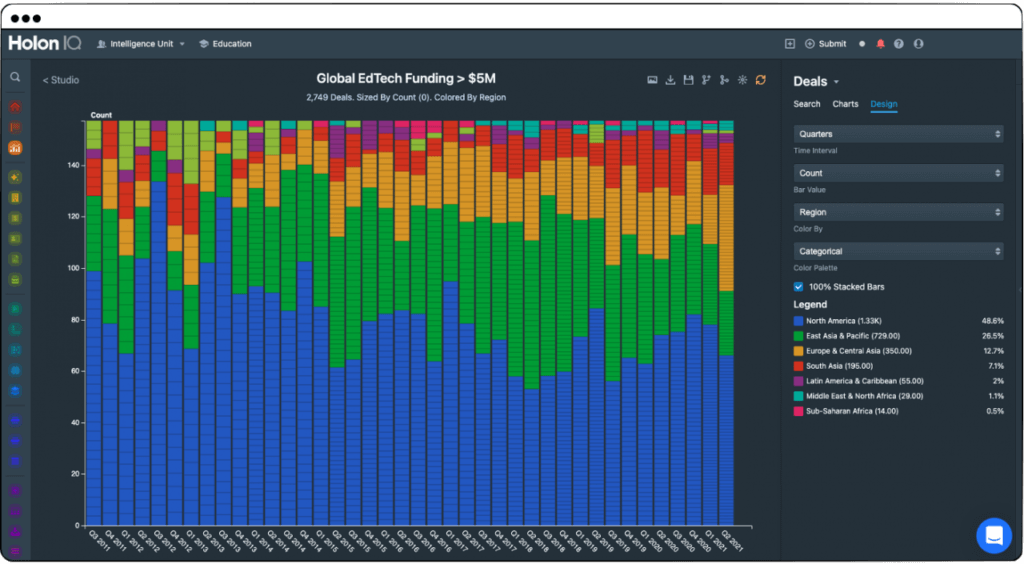 107 EdTech $100m+ Mega Funding Rounds. The fundraising evolution of every single EdTech player globally that has ever raised a USD$100m+ funding.

The chart below shows the funding evolution of the 74 education technology companies that have raised 107 $100m+ VC rounds since 2010. Each dot represents a funding round, the lines represent individual companies and link their respective funding rounds. Asia Pacific headquartered companies in red, Americas in blue, Europe Middle East and Africa in green. 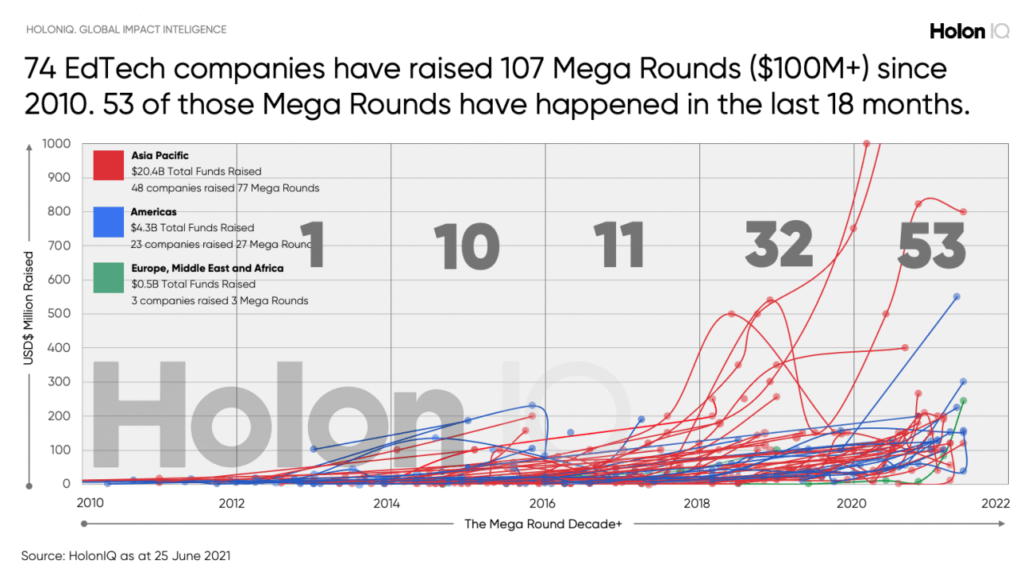 In the last quarter alone, we’ve seen seven new EdTech Unicorns and another Unicorn alum head for the NYSE via IPO. GoStudent joined the list last week, raising a $244M Series C alongside Go1 and JoyTunes joined in June as well raising a $50M Series D. ApplyBoard, already a Unicorn, topped up with a $300 million Series D two weeks ago, Zhangmen graduated via IPO, raising nearly $42 million with a $2B market cap just after Masterclass raised a $225M Series F in May with Handshake raising a $80M Series E in May as well. Outschool joined the list in April, raising a $75M Series C together with Degreed, raising a $153M Series D.

As of 29 June 2021, there are now 27 EdTech Unicorns around the world who have collectively raised over $16B+ of total funding in the last decade and are now collectively valued at $80B+. Not all 74 companies that have disclosed a $100M Mega Round have disclosed their valuation, many have raised below the Unicorn valuation threshold, others are purposefully avoiding the Unicorn label and each quarter we see another Unicorn escape the heard and graduate to the Capital Markets.

This Featured Article has been produced by HolonIQ. Rize ETF Ltd make no representations or warranties of any kind, express or implied, about the completeness, accuracy, reliability or suitability of the information contained in this article.

Webinar: Investing in the Sustainable Future of Food and Education Tech / Digital Learning